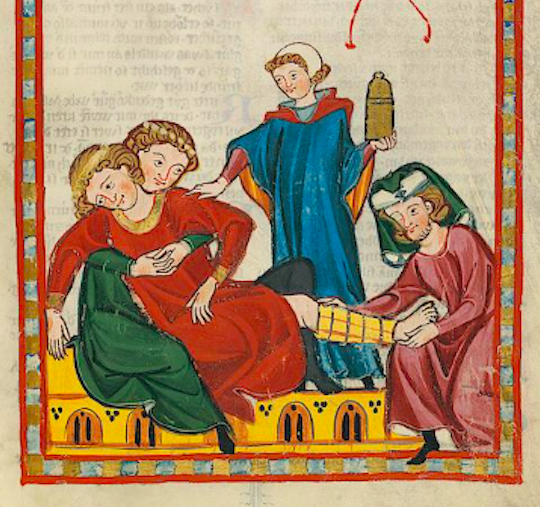 Tis humane to have compassion on the afflicted; and as it show well in all, it is especially demanded of those who have need of comfort and have found it in others… among whom… I may be numbered.

With 2020 in the rear-view mirror and a global pandemic still in full swing, the Middle Ages can teach us a lot about human creativity persevering in the face of hardship.

One of the most enduring examples is Giovanni Boccaccio’s Decameron, a book of 100 stories told by 10 young women and men over the course of ten days in self-isolation as the plague ravaged the city of Florence, Italy in 1348. Several comparisons have been made between Covid-19 and the Black Death of the 14th century, especially the fact that the contagion first hit hard in Asia, then Italy was the first country in Europe to see major casualties. The plague organism that caused the  Black Death—yersinia pestis—killed nearly 90% of the population in the Chinese province of Hopei (around 5,000,000 people), before migrating along trade lines to wipeout between 40% and 60% of the population in the Middle East, North Africa, and Europe.[1]

Boccaccio presents a gruesomely detailed description of how people suffered from the Black Death including bleeding from the nose, black spots and/or tumors on the thigh, armpit, and “elsewhere.” People died within 3 days of showing symptoms. Since the plague was unknown to doctors of the time, they had no remedies for it, and Boccaccio recounts the choices people made to cope with the dangers of the disease. Some folks separated themselves from the sick and avoided all excess and every kind of luxury in food and drink. Instead, they “diverted their minds with music and such other delights as they could devise.”[2] Others decided to follow the biblical axiom to “eat, drink, and be merry for tomorrow you die.”[3] They partied in public houses and taverns to “take their pleasure with song and revel, sparing to satisfy no appetite, and to laugh and mock at no event, was the sovereign remedy for so great an evil.”[4]

As a musicologist, I find it interesting that both the YOLO partiers and the quarantine crowd turned to music as a recreational remedy from the pandemic. Boccaccio primarily uses storytelling as the genre for recreation in the Decameron, but his characters also sing songs, play musical instruments, and dance. With this in mind, here are a few examples of medieval songs that can be used for palliative purposes (for soothing and calming) today as they may have been used hundreds of years ago.

Interestingly, the affliction that Boccaccio, or at least his poetic-persona, endures in the introduction of the Decameron is not the pandemic, but rather love: an unfulfilled love that burns like fire causing extreme suffering and distress. The theme of love-sickness was a central part of the artistic movement called fin’amor. Known today as “courtly love”, a more literal translation is “true love” or “faithful love.” You might hear this kind of language in fairytale romances where the heroine is saved by “true love’s kiss” and in the end “true love conquers all.”

In the Middles Ages, this stylized form of love fit into the broader set of upper-class masculine ideals called chivalry. Remnants of chivalry are still alive today, think opening a door for a woman or carrying her school books or grocery bags, but in the Middle Ages chivalry and courtly love could be seen in many places: in stories, music, and even religion. Long lists of rules were written down for those who wanted to serve the “God of Love,” and can be found in treatises like De amore by Andreas Capellanus (c. 1184). Here are two rules that describe the symptoms of love-sickness, so you can determine whether or not you are in love.

Rule 15: Every lover regularly turns pale in the presence of his beloved.

Rule 16: When a lover suddenly catches sight of his beloved, his heart palpitates.

Music is one treatment for the symptoms of love-sickness. Songs, in particular, divert the mind and eases the suffering in the soul. The earliest love songs to survive in a European vernacular language with melodies intact were written by the troubadours. The troubadours were poet-composers who originally came from region in the South of France around the late 11th century. One of the most famous troubadours, Bernart de Ventadorn (c. 1135-1194), evokes the symptoms of love-sickness in his song “It is no wonder that I sing” (Non es meravelha s’eu chan).

You can listen to the whole song here:

Men were not the only ones to suffer from love-sickness. The ancient Greek physician Galen (129-c. 200 CE) was well aware of the impact of unrequited love on the body. In his treatise “On Prognosis”, Galen tells the story of diagnosing a young woman who suffered from insomnia, tossing about sleepless through the night. First, he ruled out fever as the cause. Then he surmised that she either possessed an excess of black bile that caused melancholy, or she was  troubled about something else which she was unwilling to confess.

One day, by chance, Galen was taking her pulse during an examination when his aide entered the room to say that he had seen Pylades dancing at the theater. The woman’s color and pulse changed, becoming extremely irregular at this statement. The next day, Galen tried an experiment. He had his aide announce that Morphus was dancing at the theater, when this did not provoke the same response as before, the next day the aide mentioned Pylades again. When the woman’s pulse only changed at the name of Pylades, Galen affirmed that she was in love with this dancer.[5]

While becoming physically ill from love may not impact all people in this way, the mental and emotional turmoil that accompanies falling in love is pretty common. A poignant decision that often torments lovers is: when should I declare my feelings? The following song addresses this question in the form of a debate (tenso) between the troubadour Raimbaut de Vaqueiras and his fellow poet from the north of France, the trouvère Conon de Béthune. Raimbaut poses the question of whether a lady should favor: a suitor who tells her of his feelings, or one who is too fearful to tell her. Conon argues the side of the courageous lover, even though much of courtly love aesthetic relies on the suffering of unrequited love. He says:

“For sure, Raimbaut, however I may act with others, I will never conceal my suffering from my lady, for a man may ask too late for aid, but what use if aid to me once I am dead? Only a fool hides from the doctor his illness which becomes thereby more painful for him and more difficult to cure: on the contrary, a man ought to reveal it so promptly that–if his lady is willing–he may be cured at once.”[6]

Whenever I describe how these debate songs work, they remind people of rap battles in today’s popular music culture. Inspired by this, I made a “mash-up” performance of this debate with a translation of the poetry that tries to keep the original rhyme-scheme of the lyrics set to a free beat track called “Strapped up” from freebeats.io.

In the spirit of Boccaccio’s Decameron, I challenge you to create your own pandemic story or debate song and share it here with me or with the rest of the cyber-world.

[1] The largest pandemic in human history except for the spread of smallpox and measles among indigenous peoples due to contact with European colonists in the early modern period. Monica Green, “Pandemic Disease in the Medieval World: Rethinking the Black Death,” The Medieval Globe, vol. 1 (2015): 9.